Rhododendrons and Azaleas – what’s all the fuss about?

Rhododendrons and Azaleas – what’s all the fuss about?

So, what’s so special about azaleas and rhododendrons?  The answer is simple.  They are the epitome of spring and when in full bloom nothing compares to their show-stopping, vivacious displays of colour at that time of year.  Enchanting when viewed close up and a grouping of them viewed at a distance or encountered in a woodland setting is nothing short of glorious.

Rhododendron and Azalea Groups?
One of the most common questions asked by customers is “what is the difference between a Rhododendron and an Azalea?”  It’s not straight forward to answer so, here is the botanical explanation!

All Azaleas are members of the genus Rhododendron. Rhododendron is a genus (a group of plants with shared characteristics) and Azaleas are a group within that genus, rather than forming a genus of their own.  Distinguishable differences are:

– An Azalea has approximately 5 stamens in the flower, while other rhododendrons have 10 or more.

– Azaleas may be deciduous or evergreen, but other rhododendrons are evergreen.

– Azaleas are small to medium sized shrubs, but other rhododendrons range from tiny prostrate shrubs to huge woodland trees.

They all require the same conditions and treatment for healthy growth.

So, within the Rhododendron genus, we’ve separated them into categories to help customers with their selections, though these categories are not recognised botanically.  In this article we are going to focus on the most popular categories sold at Coolings namely, dwarf, yakushimanum, big leaved and deciduous Azaleas. 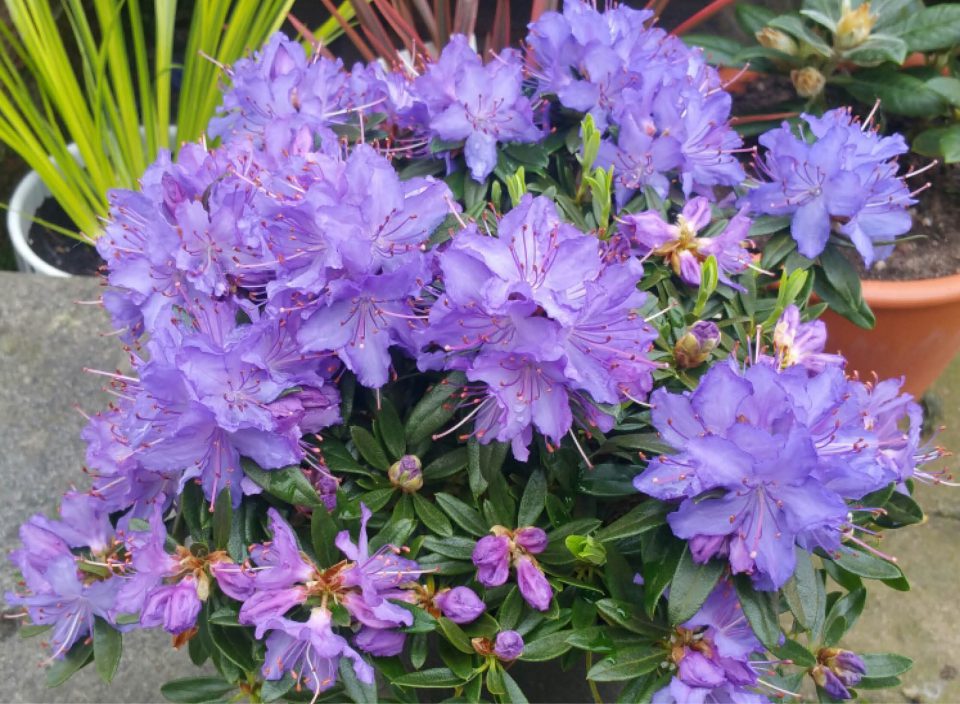 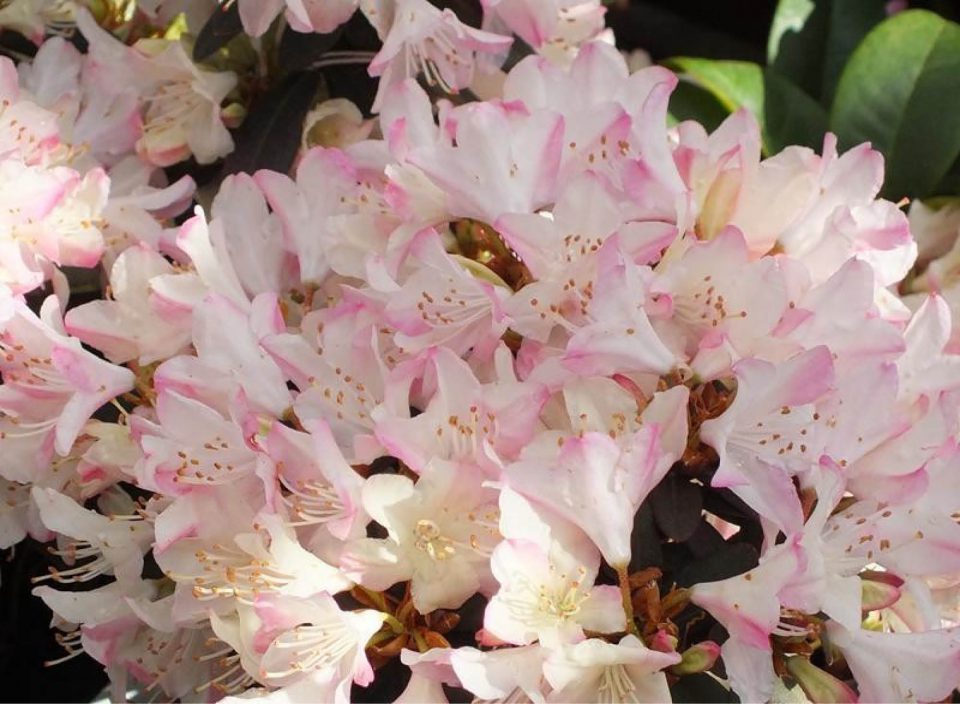 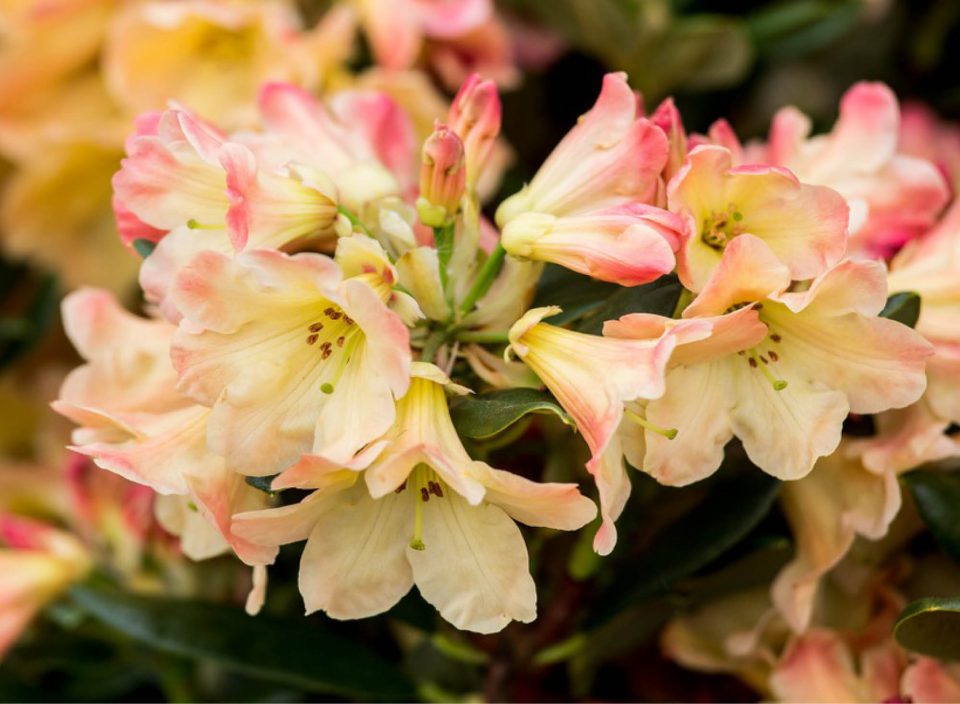 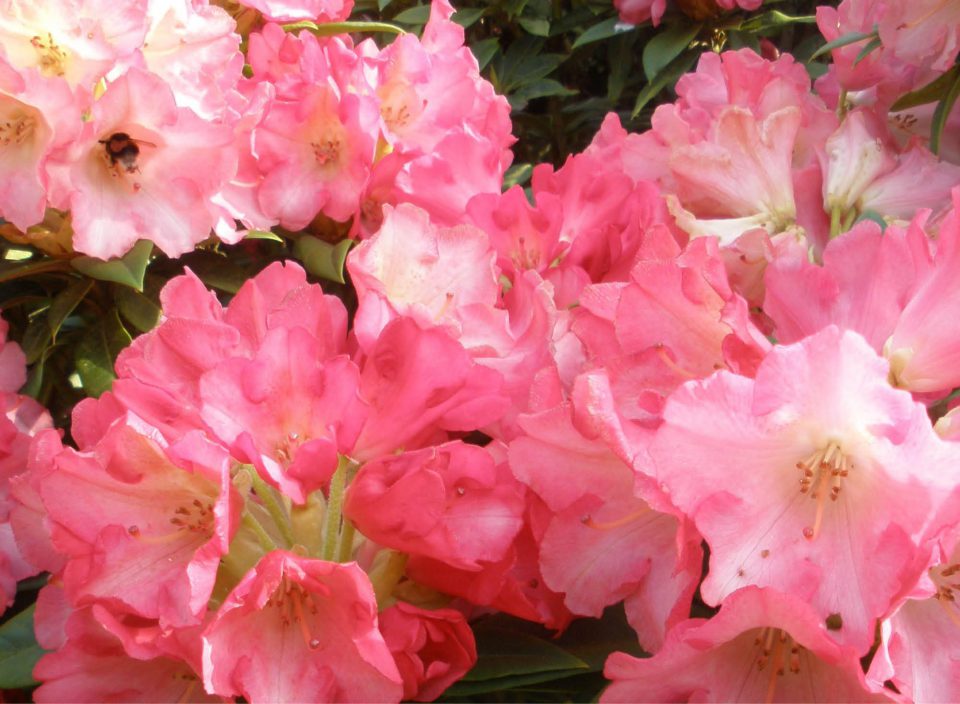 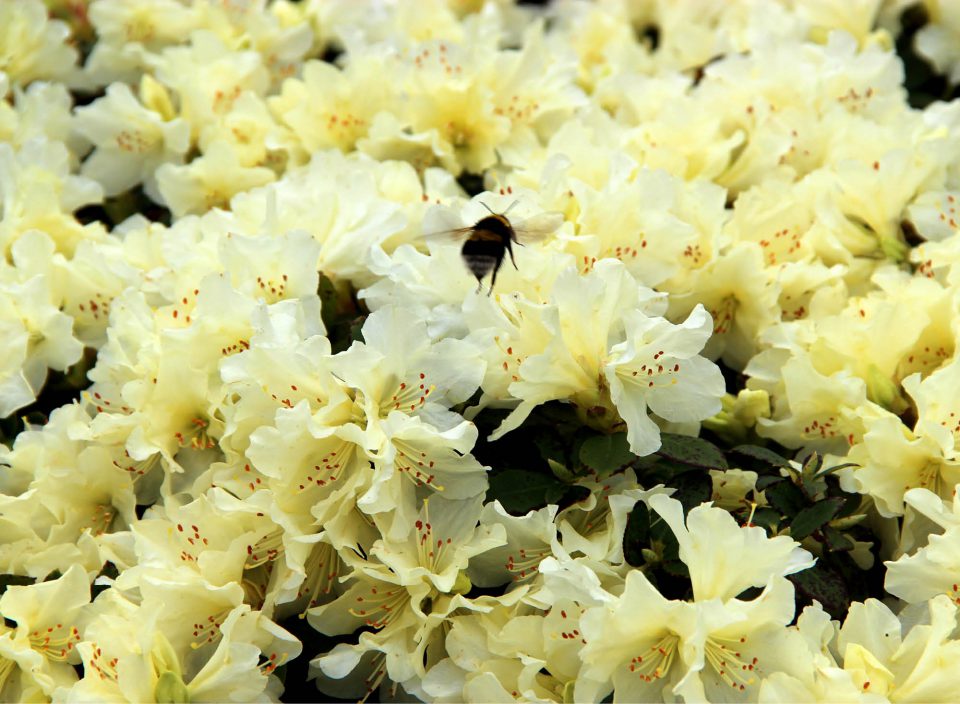 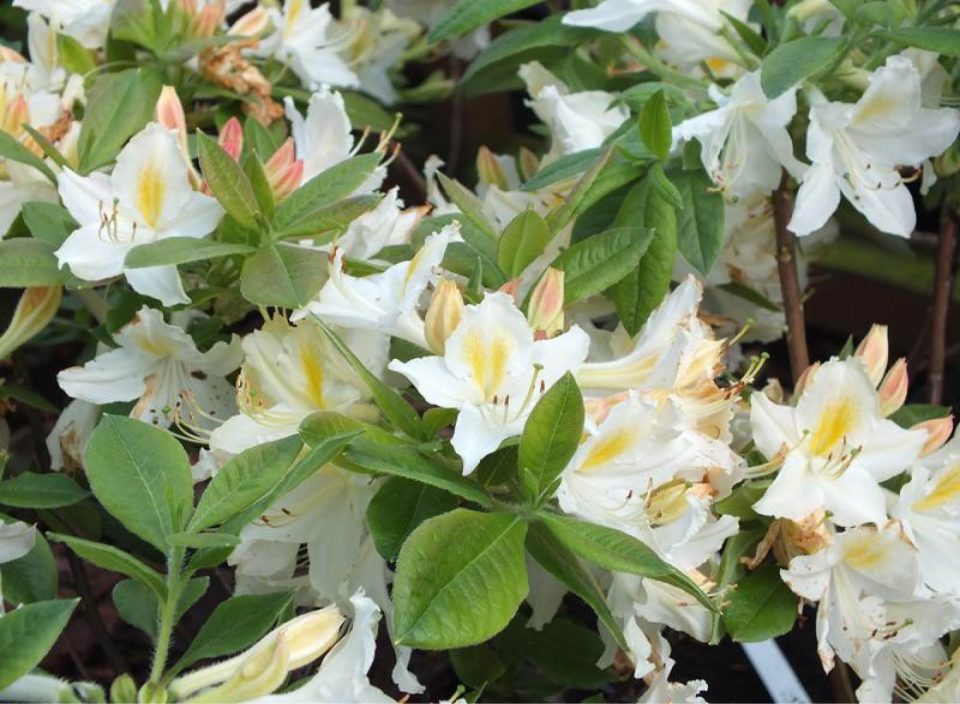 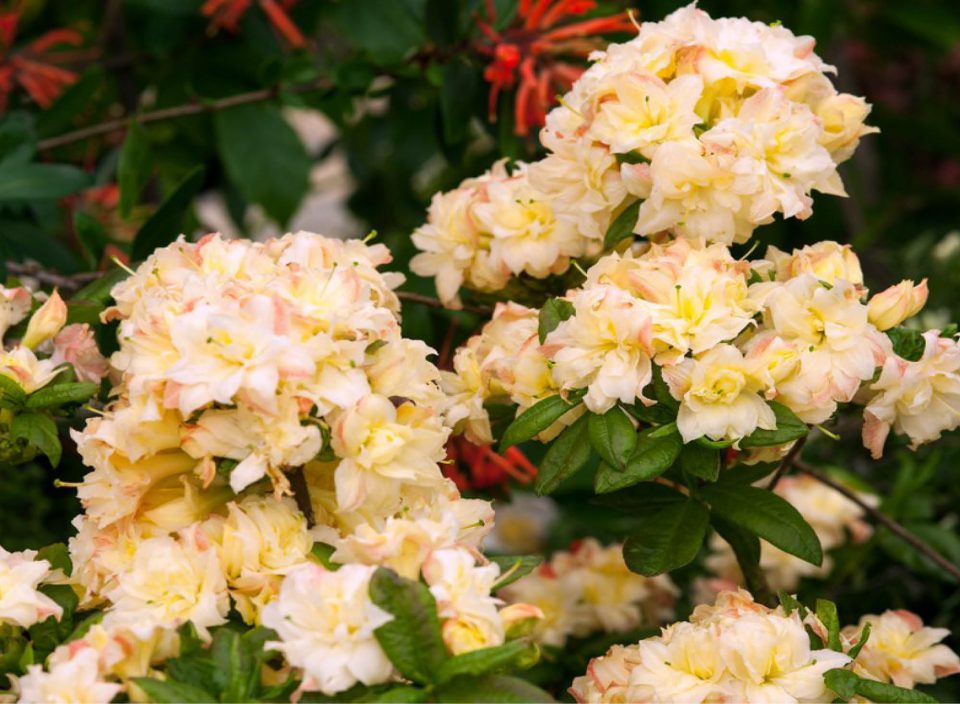 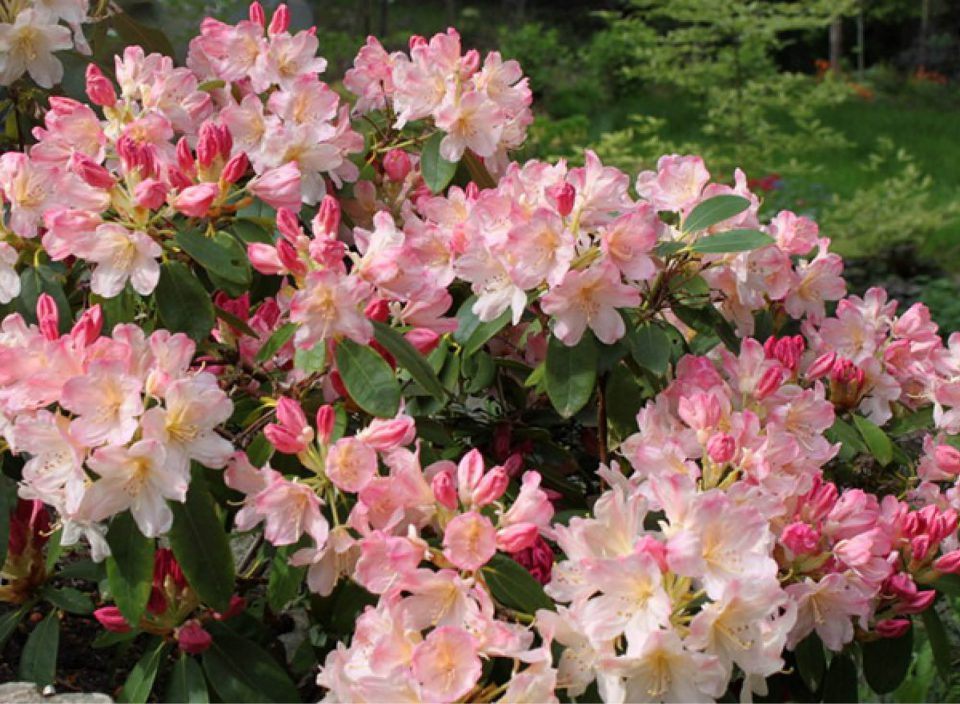 Dwarf Rhododendrons
These are mainly alpine varieties, and range from very tiny plants from 20cm up to around 80cm after ten years.  They can be species (found in the wild) or hybrids (bred by man).  Generally, they boast small leaves and mainly flower in April time.  They look fabulous planted in groups of three of five and are perfect for smaller spaces and rock gardens.  Our favourites this year are Cowslip’, ‘Ginny Gee’, ‘Night Sky’ and ‘Patty Bee’.

Rhododendron yakushimanum
This sought-after group of hybrids originate from Yakushima Island in Japan where they grow naturally.  They produce big, showy flowers but are nice and compact, growing into mound shaped plants. Ideal for smaller gardens, near the front of the border, or in containers.  The incredibly beautiful and exceptionally floriferous Rhododendron ‘Percy Wiseman’ is a particular favourite of ours for its colour changing flowers. Others include ‘Surrey Heath’, ‘Dopey’, ‘Nancy Evans’ and ‘Percy Wiseman’

Deciduous Azaleas
Deciduous, because unlike most rhododendrons, they drop their leaves in the winter, often after a fiery autumn display of red, orange or yellow foliage.  Flowers can range from subtler shades of pink and white such as ‘Cannon’s Double’ and ‘Daviesii’, to the bolder yellows, oranges and purple of ‘Azaleodendron’ and ‘Anneke’.  They grow best in a fairly sunny spot and are tough and fast growing and many of them (like the rare hybrid ‘Azaleodendron’) are scented.

Big Species
Otherwise known as the ‘show offs’ of the Rhododendron world! These are true Rhododendrons, originally collected from the Himalayas, Asia and America.  They give great architectural structure and a ‘WOW’ factor to your garden.  We love:

Few shrubs are as anticipated in the spring as Azaleas and Rhododendrons, they have a way of taking centre stage in just about any garden, so make sure you visit our large range in store now.